The School of Everything with documenta14 Kassel 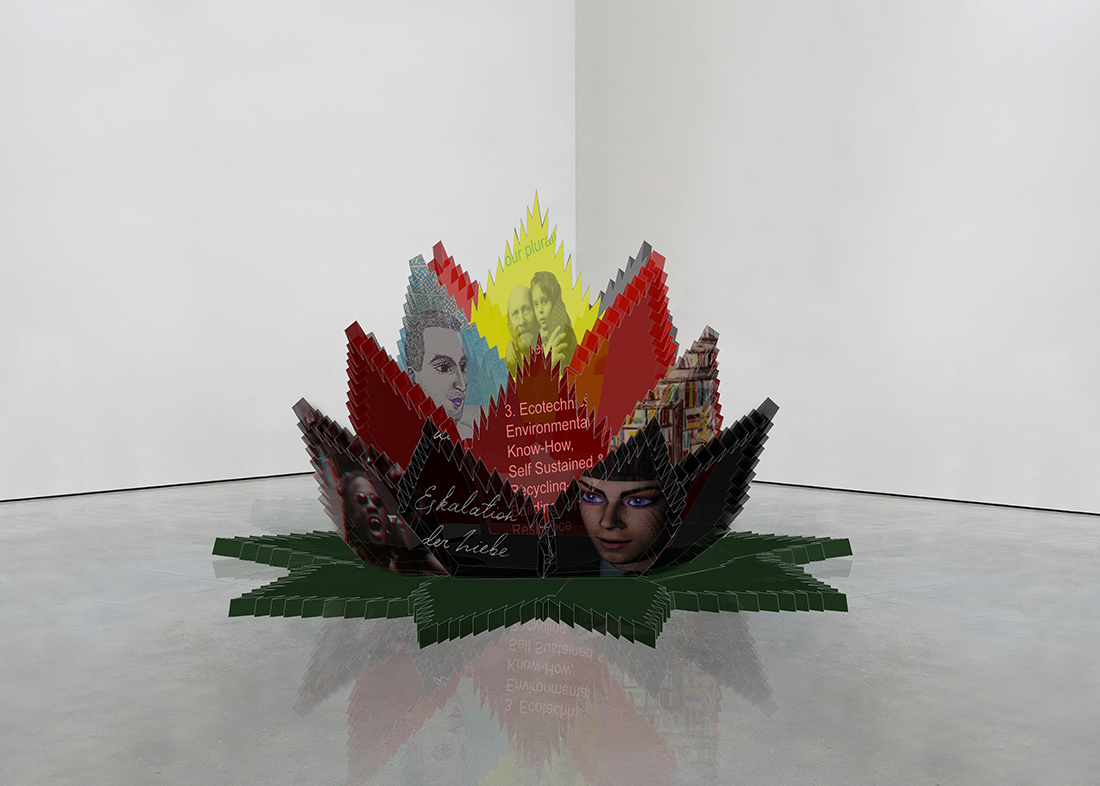 Curator of the Symposion: Sotirios Bahtsetzis

We build an educational system which consists of politically motivated and artistic initiatives for sharing knowledge, and of proposals by thinkers who see education as decisive for social change. Texts, documentations, manifestos and sketches of educational models are united in a Symposion entitled: The School of Everything. The Symposion takes place in both Kassel and Athens. We shift from learning to sharing. We decriminalize sharing because we would like to enjoy the pleasure of giving. We liberate ourselves from the strictures of “Homo Sapiens”, a construct imposed upon life. We will transform the educational system of Europe.

Athens
Parko Eleftherias, Athens Municipality Arts Center and Museum of Anti-dictatorial and Democratic Resistance
July 6, 12 am -18 pm
July 7, 12 am -18 pm
the program will be announced soon

Ahmad Alkhatieb was a student and a football player in Syria. He then participated in the revolution from its very beginning, in Homs. Sometimes he held arms and stood in checkpoints. Ahmad has made several documentaries about the situation in Syria. Currently he lives in Germany where he joined an Anti-Assad soccer team.

Constantinos Amvrosiadis started to practice Shaolin Kung Fu, as a response to the diagnosis of acute leukemia in 20016. In 2009, 2012 and 2014 studied at the monasteries of Shaolin, Wudang, FaWang and Chen Jia Gou, birthplace of Zen (Chan) and the Shaolin Martial Arts with teacher Shi Miao Dian, Shi Miao Jie, and later on with Taoist monk Yuan Xiu Gang. The abbot of the Shaolin temple, Shi Jing Shin, recognized Mr. Amvrosiadis’ efforts and his contribution to the Shaolin’s tradition. Constantinos was included in Shaolin’s 34th generation, named Shi Yan Jing 延 延 精 meaning: essence, seed, sharp. The Shaolin monastery teachers from Wudang and his students assigned a new name for him, denoting the union of the four elements, “fire”, “water”, “wind” and “earth”, and their matching in the arts, “Kung Fu”, “Tai Chi”, “Qi Gong “.

Sotirios Bahtsetzis PhD works as an art historian, independent curator and art critic, based in Athens and Berlin. He teaches at the American College of Greece. Besides art historical articles on installation art; theory of space, visual studies and methodology of art history, he contributes art theoretical articles to periodicals, such as E-flux Journal and South magazine.

Helmut Batista has studied opera direction at ESAT in France. In 1998 he founded CAPACETE which he has directed ever since. CAPACETE has produced new art works, seminars, workshops, residencies and books under its own umbrella and with collaboration with many partners and in different countries. In 2015 CAPACETE inaugurated its new one year program.

Sebastian Bayse Schäfer is a sound artist and art director. He studied Communication Design and earned an M.A. in Sound Studies at UdK Berlin. He gained the title of associate Professor at the Avtonomi Akadimia with his 2016 lecture on ‘Sound Wars’ at the Athens Biennale. He is timetravelling since 2050, mingling the revolution and synthesizers. Also he is responsible for the layout of this book.

Vasyl Cherepanyn is Head of the Visual Culture Research Center (VCRC, Kyiv) and an editor of the Political Critique magazine (Ukrainian edition). He works as a lecturer at the Cultural Studies Department of the National University of Kyiv-Mohyla Academy and holds a Ph.D. in philosophy (aesthetics). Also he worked as a guest lecturer at European University Viadrina in Frankfurt (Oder), Germany, at the “Political Critique” Institute for Advanced Studies in Warsaw, Poland, and at Greifswald University, Germany. He was also a visiting fellow at the Institute for Human Sciences in Vienna, Austria. In 2015, VCRC has received the European Cultural Foundation’s Princess Margriet Award for Culture for its activities. Visual Culture Research Center was also the organizer of The School of Kyiv – Kyiv Biennial 2015.

Born and raised in Germany, Katja Ehrhardt completed an M.A. specializing in Performance Theory in Anthropology and Modern and Classical Indology at the University of Heidelberg. She lived, studied, and worked in the United States, Japan, India, Bermuda, Thailand, Nepal, Malaysia, Israel, and Hong Kong. In Germany, she worked in research, international arts management and curation i.a. at the University of Heidelberg, at Pruess & Ochs Gallery Berlin (Asian Fine Arts), at the German Academic Exchange (DAAD), at the House of World Cultures Berlin, and at the Goethe Institute. In Athens, she built up, organized, and managed the cultural program at the Athens Centre for University programs from abroad, working together with cultural institutions and embassies in Athens. Before working with Athens, she coordinated and co-curated the cultural program of the Asia-Pacific Weeks at the Senate Chancellery Berlin and the House of World Cultures Berlin. She is the co-founder of AthenSYN, an initiative to foster the artistic collaboration with Greece with focus on German-Greek cultural exchange.

Noah Fischer works in the studio/streets/museums/stage. Long focused on a clash between the economic realities of debt, class division and financialiation with the luxury spaces and economies of art, he is the initiating member of Occupy Museums and a core member of G.U.L.F/Gulf Labor. His work also encompasses a long-term theatrical collaboration with Berlin-based andcompany&Co. His solo as well as his collaborative work is variously seen both with and without invitation at museums internationally including Occupy Museums’ recent project Debtfair at the Whitney Biennial.

Judith Holzer is a Berlin-based animator, author and filmmaker. She studied graphic and communication design as well as multimedia art in Austria. She develops visual and conceptional artwork for both cultural and commercial projects.

Andrea Iten is a visual artist, researcher and a lecturer at the Institute HyperWerk (University of Applied Sciences Northwestern Switzerland – Academy of Art and Design). She holds an MA in Transdisziplinarity from the Zürich University of the Arts.

Elad Lapidot is a faculty member of the Freie Universität Berlin at the Institute for Philosophy.
With expertise in Metaphysics, Logic, Epistemology, his focus of research is in philosophy of language and translation, Jewish Theology, Talmud Studies, practical philosophy and ethics as well as in theory of state. After graduating in Philosophy at the Hebrew University of Jerusalem he finished his dissertation in 2008 at the École Doctorale du Département de Philosophie de l’Université Paris-I (Panthéon-Sorbonne) on the topic of Heidegger’s Being and Time. He currently works in Berlin, teaching at the departments of Philosophy and Jewish Studies at the Freie Universität, Humboldt University, the Center for Jewish Studies Berlin-Brandenburg, and the University of Potsdam. Elad Lapidot engages in human rights workshops as well as in intercultural exchange, namely with the association Deghetto e.V.

Lindsay Parkhowell was educated at Bard College Berlin, a liberal arts university without majors or disciplines. He is the secretary of Propaganda and Poetics for the Avtonomi Akadimia. His first first chapbook of poetry, Driftwood, will be published in 2017.

Agnès Peeters Dr Egyptology. Chair of the Association, Art without Bars During the 90ies, Mrs. Rammant-Peeters was deeply engaged with the post perestrojka art scene and ran a legendary gallery Art Kiosk in Brussels. Art Without Bars is one of her restless initiatives bringing art to the world and inventing new environments for its enfolding.

Paul B. Preciado is a philosopher, curator, and transgender activist, and one of the leading thinkers in the field of gender and sexual politics. An Honors Graduate and Fulbright Fellow, he earned an M.A. in Philosophy and Gender Theory at the New School for Social Research in New York, where he studied with Agnes Heller and Jacques Derrida. He holds a PhD in Philosophy and Theory of Architecture from Princeton University. His first book, Contra-Sexual Manifesto became a key reference for European queer and transgender activism. Paul B. Preciado is Curator of Public Programs of the documenta 14.

Mischa Schaub is a designer. From 1999 to 2017 he was the head of the Institute HyperWerk (University of Applied Sciences Northwestern Switzerland – Academy of Art and Design). From 1979-83 he gained professional experience designing watches for the company Omega. Moreover, he developed corporate identity design at Z & L, Zurich. He then worked as Managing Director of D AG. From 1983-95 he developed 13 patents. In 1988 he wrote “Creative Design Work on the Computer”. He laid the foundation for HyperStudio and HyperWerk with “Code_X: Multimediales Design” (1992).

Johanna Scherf is a master student in clinical psychology in Berlin. Since 2015, she supports the initiative School for Kobanê rebuilding schools in western Kurdistan. Johanna is a humanitarian aid volunteer in Greek refugee camps and was involved in the establishment of a community center near Thessaloniki. As a collaboration of the Bildungswerk Berlin der Heinrich-Böll-Stifung and Joliba e.V., Johanna plans a conference to improve the humanitarian situation for refugees in Greece and Turkey.

Max Spielmann
Max Spielmann is a member of the board of the Institute HyperWerk (University of Applied Sciences Northwestern Switzerland – Academy of Art and Design) since 1999, responsible for audiovisual media and since 2015 for theory & reflection. His main areas of research are participatory media, commons and new technologies.

Joulia Strauss (the political activist supercat shaman artist in Athens) stands for a chord of artistic media, resonating in a deep bond with philosophy, technology and politics. She has founded and organizes Avtonomi Akadimia, a socio-cybernetic sculpture for an education after the era of master discourse. Strauss’ works were recently presented at the Fourth Moscow Biennale, Tate Modern, London, ZKM | Center for Art and Media, Karlsruhe. In collaboration with Peter Berz, Peter Weibel and Friedrich Kittler, she has edited a book “Gods and Writing around the Mediterranean“, Wilhelm Fink Verlag / Brill Publishers, May 2017.

Mathilde ter Heijne is a Berlin-based Dutch artist primarily working within the mediums of video, performance, and installation practices. She studied in Maastricht at the Stadsacademie (1988-1992), in Amsterdam at the Rijksacademie voor Beeldende Kunsten (1992-1994), and since 2011 has been a professor of Visual Art, Performance, and Installation at Kunsthochschule Kassel.
Ter Heijne’s research based practice is founded in intersectional feminism. She shows an activist and yet similarly radical approach to art-making as a participatory process. For ter Heijne, ritual and ceremony are structures for artistic observation and potential emancipation. Ritual, historically, is where woman has both lost and gained her power.

Jonas Tinius, PhD, is a post-doctoral research fellow at the Centre for Anthropological Research on Museums and Heritage (CARMAH, www.carmah.berlin), co-funded by the Alexander von Humboldt Foundation and based at the Department of European Ethnology, Humboldt- Universität zu Berlin. He studied at the Universities of Münster and Cambridge (U.K.) where he completed a PhD on political theatre and self-cultivation. His current research explores how Berlin-based art institutions engage with notions of otherness through critical curatorial strategies. He is convenor of the Anthropology and the Arts Network of the European Association of Social Anthropologists (with Roger Sansi, Goldsmiths).

Sotiris Tsiganos / Ionian Bisai
Sotiris Tsiganos (b. 1992, Department of Fine and Applied Arts, UOWM) and Ionian Bisai (b. 1992, Athens School of Fine Arts) are visual artists. They work together in research based projects in subjects such as the contemporary social history, where it takes place and the communities that are excluded from it. Latent Community (ongoing) is a visual arts research project that investigates the concept of the latent community as a social condition, produced through a range of possible circumstances such as dislocation, dispossession, atypical organizational systems or a state of concealment (through choice or necessity).

Arnisa Zeqo is an art historian based in Athens.
In 2011 she co-founded rongwrong, a space for art and theory in Amsterdam. Recently she was curator in residence at Center for Curatorial Studies at Bard College where focused on works of art at the edge of the performative. There she wrote the conceptual essay ‘Let’s Spit on Szeemann’. Zeqo is part of the team of Documenta 14 in Athens as coordinator of education. She initiated the Society of Friends of Ulises Carrion within the Parlament of Bodies.